14th June 2020
Family drama update. They are all ok.
This morning the three of them were asleep in a corner of the field. Mum was cradling both lambs.
She is quite relaxed about me poking my nose in and we watched each other for a long time while
the lambs slept. It dawned on me how clever she had been. Her family were neatly stashed in the
corner so it would be relatively easy for her to keep track of her lambs.
Tonight we could see several things going on. Mum has moved them more to the centre of the
field. This is where the mums bring the lambs and they start forming bonds with their flock mates.
The lambs sniff the other ewes and they begin playing with the other lambs. The sighted sister is
very bold. She’s off roaring around the field, mixing with the other sheep, very confident. What we
saw tonight. She is taking her blind sister with her on shorter expeditions. When big sister goes off
for longer play dates, our little blind lamb stays close to her mum. More astonishing, the ewe
seems to be aware of the older sister needing to clear off for a while and we watched her step in
and sort of take over lamb watching.
The sisters are interacting together with a lot of tactile behaviour. I can tell you that it is more than I
would normally expect with siblings. Something interesting is going on. They sniff each other nose
to nose, nostril to nostril. There is quite a bit of neck weaving and cuddling. They touch a lot.
Sighted sister is taking her on forays. They are skipping and running together. Blind lamb is much
more confident today. She is doing short bursts of running and there seems to be a little bit of fun
going on.
And here is something truly amazing. The ewe has figured it out. When the lamb is in that proximity
zone where she should expect her daughter to be able to see her, she is vocalising. I had to watch
for a long time to make sure I wasn’t wishful thinking. But, they are definitely calling to each other
much more than the other ewes and lambs when they are close. They seem to be finding each
other relatively easily when the distances aren’t too big. Yesterday at these distances she was lost.
Today, she’s a confident little bunny.
Something else has changed. She is no longer leaping in the air, jumping in alarm. She is using
her nose. I was a bit worried that the lamb was listening for me too. She needs to focus on her
mum and sister and forget me. She orientated towards me when I was talking on the field, made a
few steps towards my voice and then stayed put. Hooray.
As we were leaving the field her mum bought the lambs over to the gate. It’s clear that our little
lass is tracking a great deal. She has her nose down and the funny little movements that I’d seen
before are now happening as she explores the ground and other sheep. She is able to close in on
something without bumping into it. Her nose and her ears are definitely beginning to get her          around the field. She is navigating quite busy spaces, she is locating her mum and she seems
much less fearful. Her family are totally cool about caring for her. They also seem to be extremely capable.
She didn’t jump when the buggy started. One of our Coaches in training has named her Ida.

27th June 2020
Loving Adele this evening and thinking about a tiny lamb who has been a light in my day today.
Today was a big day in the life of Ida. If you are joining Ida’s story here, she was born after her big
sister. Actually mum and I bought her sis into the world between us. When I returned to check on
them, there she was a little cutie all curled up with her mum and sister. It was only in the following
24 hours that I realised something wasn’t quite as it should be. Little Ida is unsighted.
So, we all had an adventure for a few days and the result so far is that Ida and her family are doing
astonishingly well. But. the day was looming, grass in the nursery is nearly gone, so the big move
was on for today. I’ve been watching to see how she was doing and would she be disorientated?
Would I need to pick her up? In a word, “no”.
A few days ago I thought I’d seen something amazing. Now I know I’ve seen it. Ida’s sister ran over
to her and laid her nose on top of Ida’s rump, using her nose as a pointer, two seconds later and
the pair of them ran off sis in front, Ida behind in the direction of the nose point. Don’t be so daft!!
Seriously? I surely didn’t see that? Wait. They hung out under tree with some other lambs, chewing
stuff and generally doing lamb stuff, then, oh my! Sister and Ida do this gorgeous neck cuddling
thing and Sis lays her nose along Ida’s flank….. whoosh, Ida runs ahead in the direction of the
nose point. Cue for a bunch of lambs to join them running like loons.
Ida lost them. They zoomed off and she bumped into a tree. Damn it. Nope, she was fine, the gang
circled round and picked her up. I watched this for days. She bumps into things occasionally, but
mostly her sister points and she either runs ahead or follows. Sis is now twice the size of little Ida.
Those first few days have taken their toll. But, her mum is as attentive as ever and she is being fed
well.
So, back to today. I built a sheep road years ago to guide the flock. My plan was for the ewes to
move their lambs between the fields at each end of the road. I called the ewes, greedy lumps, they
all come running and I fed them outside the field gate. Where is Ida? Can’t see her. That’s sort of a
good thing, she’s in the thick of this tiny flock, which means a lot of sheep are looking out for her
(even if the other ewes clonk her one for tying to pinch illicit feeds). Anna and I went into the
field to try and coax the tail enders out. By the time we came back to the road, ummm, no one
there! they’d gone. Vamoosed.
Five very young lambs were left in the field, so, we left the gates open. Their mums would come
and collect them later and take them more quietly on their own. So, it wasn’t until later in the day
that I closed all the gates and went to find our girl. I’m fairly sure that she made that big trip, in new
territory in the first wave of ewes and lambs shifting fields. Well. She doesn’t lack confidence
anymore.
There she was. on top of the new field and sure enough, her sister, tapped her on the bum and off
they went like the wind in the direction of the pointy nose. I had a slight wobble when I watched her
run into another tree, but, truly, she bumps into these obstacles gently. She isn’t clattering herself.
She seems very ‘matter of fact’ about it and is roaring around…. that lamb that “boldly goes”…
gone!
She will need some medicines to protect her tomorrow and then I will introduce the main flock.
I am still thinking about the best way to do that. I expect it will involve Josie and PJ. Will let you know how it goes. 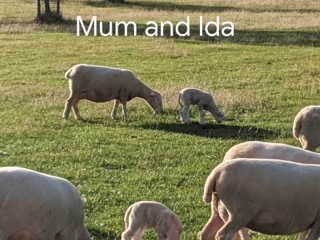 Sign up to receive the latest news and updates from us